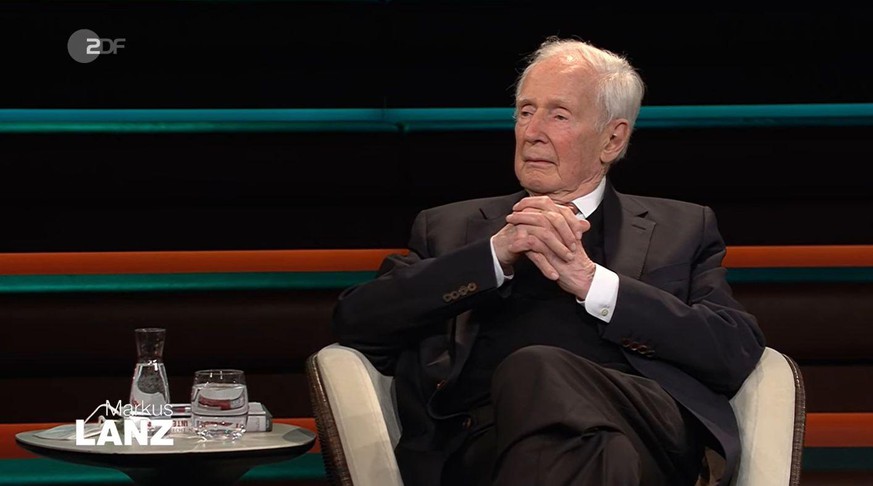 “Great group, special guests”: This is how Markus Lanz announced his talk. And especially in the group was the 93-year-old SPD politician Klaus von Dohnanyi, who on the one hand wanted to advertise his recently published book, but on the other hand repeatedly campaigned for understanding for Russia . For the vast majority, including Dohnanyi, the war that Putin is waging against Ukraine is appalling, worrying, and despicable. There is no question about that and it was repeatedly addressed and confirmed by all guests.

But who might benefit from this, how the Ukraine should behave and which political decisions led to the war, “Markus Lanz” argued intensely. The security expert Claudia Major in particular repeatedly responded calmly and factually to the SPD politician’s arguments and pointed out that he was using “Russian narrative”. The fact that the 93-year-old kept interrupting her and the economist Karen Pittel, first attacking their arguments and then agreeing with them, almost became an ugly minor matter because there were other points of contention.

The often quoted “Eastern expansion of NATO was not a NATO suggestion, but a wish of the countries to become member partners. And this was always “flanked” by a NATO-Russia connection. In addition, there were always diplomatic efforts with Russia, Olaf Scholz also tried to hold talks in February, but was unable to prevent war Klaus von Dohnanyi explained that NATO had shown insufficient diplomatic competence and that solutions were not being sought thoroughly enough when this was still possible. And the biggest mistake, in his opinion , was that the USA did not promise in writing what the Chancellor had offered in the conversation.

The heads of NATO

In the course of the talk, the former First Mayor of Hamburg kept coming back to the fact that NATO would let itself be steered too much by the USA, which historically has had major conflicts with Russia from time to time. According to von Dohnanyi, the EU should make itself more independent of the USA, including in NATO. “The Europeans have to find their own position,” he said, adding that the United States is currently “the heads of NATO.” And they also have their own agenda, which is always driven by poll numbers and voter approval. The strategy consultant Julius van de Laar agreed, but at the same time pointed out that this democracy would work.

In any case, it is more important to take a closer look at Russia in the current situation. Because, according to Claudia Major, Russia shows that war is a means “with which things can be achieved.” The quest for sovereignty that has accompanied Ukraine for many years cannot be denied by either Russia or the West. The fact that Ukrainians are now so united in the fight against Russia is a consequence of the illegal annexation of Crimea in 2014. The “sense of identity” was created by the attack from the neighbors.

Meanwhile, Klaus von Dohnanyi repeatedly showed understanding for Russia, even if he called the war injustice and also recalled his own experiences in the Second World War. The fact that some Baltic countries became part of NATO was “a problem from the start”, a “senseless provocation”. The fact that he was ignoring the sovereignty of the individual countries and the will to be independent of Russia did not appear to be a problem for the 93-year-old. One should look at facts, he said, and look to the future.

However, von Dohnanyi only wanted to be brief about the fact that facts should not be glorified and that Putin supported Assad in 2015 in order to remain in office in Syria . He referred to a paper from the Bundestag on what would come to a different conclusion and warned that understanding for the other side is always required, especially in negotiations. And so what applied to the talk show was what unfortunately also applies to the war in Ukraine: it’s a battle for narrative.

Putin’s power play and the possible consequences for Germany

Putin also wants to take this into his own hands with the latest decision to no longer supply “unfriendly countries,” as Lanz called it in the clip, with gas, oil and coal if they don’t pay in rubles. The economist Karen Pittel was certain that it was a “power play”. At the moment it is questionable how things will continue, because everyone would have to wait for Putin’s decision at the moment. Because it is possible, albeit unlikely, that he will backtrack again. A scenario in which the central bank intervenes and makes this deal possible would be more conceivable, which would result in the imposed sanctions becoming ineffective.

It could also happen that Europe then collectively withdraws from the treaty, or just a part. Pittel suspects that this could be Putin’s goal, to drive a “wedge” between the states. But the latest escalation would also have shown how vulnerable we really are to blackmail. However, she assumed that it would be feasible for Germany to forgo the deliveries, even if every day that is delivered is a day to create more reserves. “The German economy will not go under,” said the economist, even if there is currently uncertainty about what could come. The consequences would be painful, but manageable.

“If you’re ready to fall, you can stand”

Klaus von Dohnanyi also advocates not allowing oneself to be blackmailed. One should not “give in to the pressure when it is wrong”, but show backbone and attitude. “If you’re ready to fall, you can stand,” he said. At the end of the very grueling talk, he reiterated the importance of diplomacy, saying that wars are ended through negotiations. When and how that will be, he couldn’t say either.