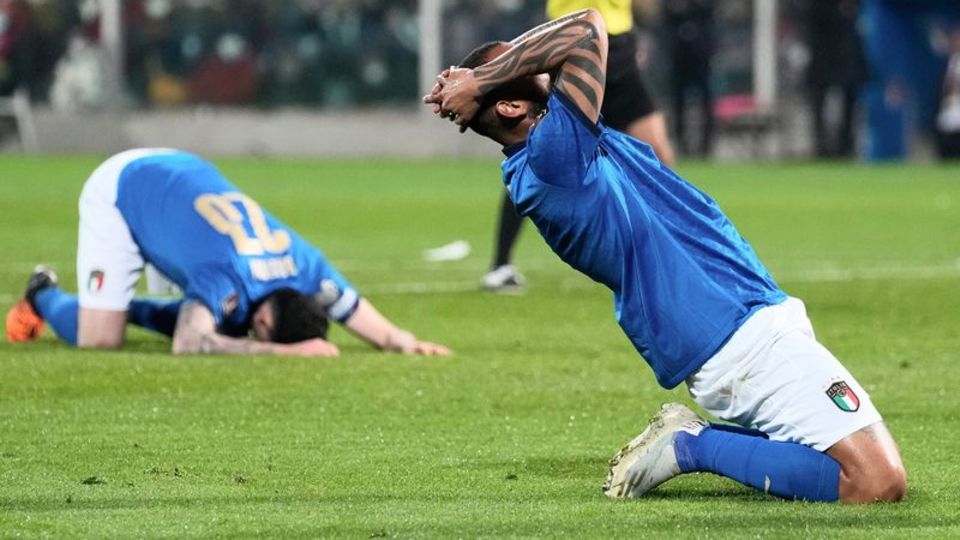 Football Italy is in shock. As in 2018, the four-time world champion has to watch the final round – and as the reigning European champion. What happens now with national coach Roberto Mancini?

Bewilderment, tears, whistles: 256 days after the European Championship triumph at Wembley, Italy has been torn from all World Cup dreams.

“Just as the EM was the best experience of my life, this was the biggest disappointment. We can’t say anything, that’s football. Sometimes unbelievable things happen and it happened,” said national coach Roberto Mancini after the sensational 0-1 (0 :0) against underdogs North Macedonia on Thursday in the playoff semifinals.

As in 2018, when the Squadra Azzurra lost to Sweden in the playoffs, the finals will take place without the four-time world champions. “Disastro Italia”, wrote the “Gazzetta dello Sport” aptly on its homepage. A goal by Aleksandar Trajkovski (90th minute +2) destroyed all hopes of the Italians for the World Cup ticket in Palermo in added time.

The Italian stars fell to the ground in horror after the final whistle. “We are disappointed, broken, devastated,” said veteran Giorgio Chiellini . EM hero Jorginho added: “It’s hard to explain what happened. It hurts so much. I’ll be honest, I’m still in disbelief.”

It was Jorginho who missed a penalty in each of the two draws against Switzerland in the group stage, helping to get them into the playoffs. “It hurts to think about it. It will haunt me for the rest of my life. Competing twice and not being able to help your team and your country is something I will carry with me forever.

And now? Such an embarrassing outcry in Italy usually calls for consequences. Mancini did not want to talk about his possible departure shortly after the game. “We’ll see – the disappointment is too big to talk about the future,” said the coach when asked. “It’s hard to think about things like that. It won’t be easy in the next few days.”

Mancini has a contract as national coach until 2026. The head of the association, Gabriele Gravina, spoke out in favor of continuing to work with the ex-professional the night after the bankruptcy: “I wish that Mancini would stay with us. We have decided on a project Committed.” Captain Giorgio Chiellini also said: “We have to stand up now and I hope Mancini stays.” On Thursday evening, however, he did not want to say whether the 37-year-old defensive veteran would continue in the national team himself.

For North Macedonia, on the other hand, it goes on to Portugal. There, the outsider, who had already outplayed Germany 2-1 in Duisburg in the group stage, will fight Cristiano Ronaldo and Co. for the World Cup ticket on Tuesday.